September 19, 2017 In Around Town By The Property Geeks

Typically, The Property Geeks get along. But we’ve found that there’s one thing that divides us, even more than the Diet Pepsi versus Diet Coke debate.

And the rivalry is coming to a head this Friday at the annual Lakeville North versus Lakeville South football game.

But when it comes to which local high school football team to support, we’re split right down the middle. Half of us live within the boundaries for Lakeville North, and half of us are closer to Lakeville South. The rivalry is real, but friendly, pitting cheers of “North or None” against “South For Life” within the office on a weekly basis. 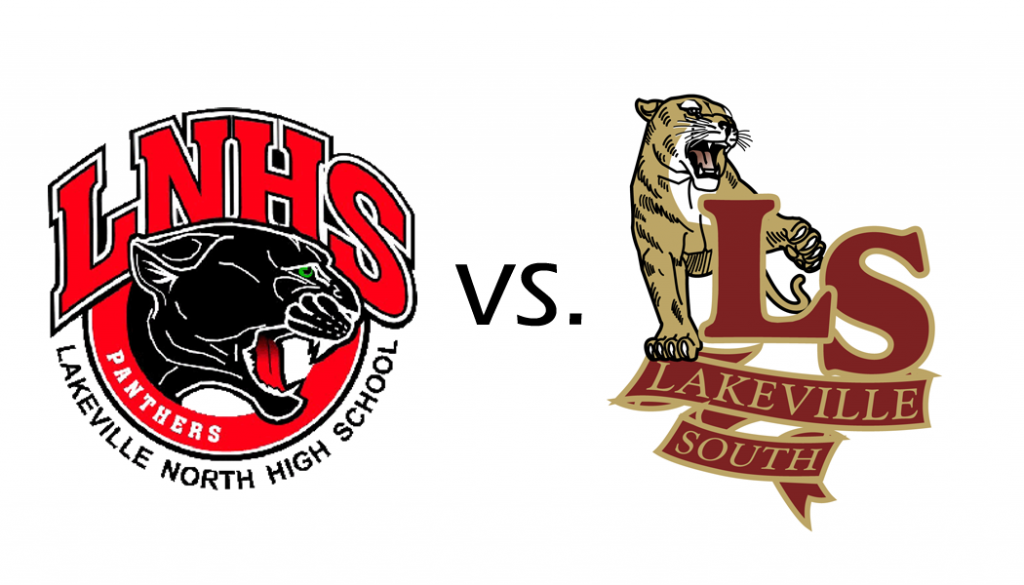 Both coaches attended Lakeville North back when it was just known as Lakeville High School, although they were a few years apart. Both played under coach Larry Thompson who will be honored at this year’s game. Both love living in Lakeville. But one thing that sets them apart is that Coach Vossen has always been at North, while Coach Krebs spent time playing as a Panther, but now sports the Cougar logo.

When asked about how he feels about Lakeville football, Coach Vossen says “It’s hard because I’ve never been a Cougar.”

Even his mentor, Coach Thompson, has spent time at both schools, first as a Panther at Lakeville High and then moving to Lakeville South to start that program when the new school opened.

Some things have stayed the same between the schools. Local parents can attest to the fact the sparkly Homecoming pants are still a big tradition. When South opened, they installed a spirit rock, similar to the one that has sat outside north for years.

But the schools also have some traditions that set them apart. North adopted the slogan “North or None” which actually originated from an email address of one of Vossen’s players, a sophomore linebacker. Coach Vossen says sometimes the tag line is misunderstood. It’s not about how great North is. It means “doing everything you can to improve your program — don’t let anything distract you.” South’s slogan “South for Life” supports a similar message. According to Coach Krebs, “Once you’re a South student athlete, you always will be.”

No matter where your loyalties lie, there’s no doubt it will be a big game for both schools.

“As exciting as it is for the community, for the kids we try to keep it about the game,” Coach Vossen says. “We’re not doing anything different for this game than we would for any other. The kids are super lucky to get to play in front of a community that’s so supportive.”

So who will come out ahead? North or South?

“I’m sure over the course of a hundred years it’ll be even,” says Coach Vossen. Coach Krebs agrees. “When the schools split, South won a lot. Now North is on a roll. We’ve got some work to do.”

In addition to the game, it will be an important night for Lakeville football. Coach Krebs says he’s excited that they’ll have a chance to honor Coach Thompson this Friday. “His legacy is still going on in both of our schools.”

It’s also Tackle Cancer Night for Lakeville North. They’ll be raising money for the Randy Shaver Cancer Research and Memorial Fund. Minnesota high schools have been participating in the program by collecting donations at a home game during the season. Lakeville South participated last week in their home win against Burnsville. Last year the program raised over $281,000 for cancer research right here in Minnesota.

Who will you be cheering for this Friday? Coach Vossen is standing behind his Lakeville North Panthers and Coach Krebs is pushing for his Lakeville South Cougars. The Property Geeks will likely still be divided. But one thing’s for sure, we’re all united when it comes to our love of the Lakeville community. 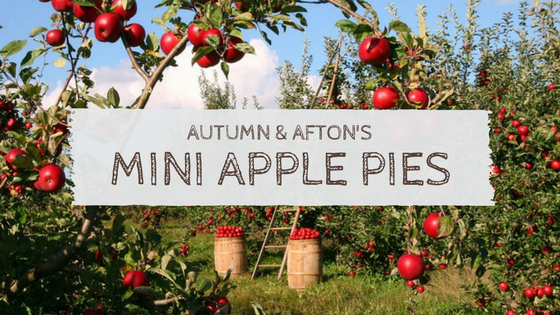 September 14, 2017 In Around Town By The Property Geeks

School has started and around here that means two things… football season is upon us and it’s time to head to the apple orchards. Luckily, we’re surrounded by fantastic options for both. Lakeville is home to two stellar high school football programs – the Lakeville North Panthers and the Lakeville South Cougars. We’ll talk about the rivalry between them next week.

We’ve also got more than our fair share of apple orchards in the area. A couple of our favorites are right down the road…

Applewood Orchards has pick-your-own apples, raspberries and pumpkins and even hayrides on the weekends. According to their website they’re already well into the 2017 harvest and ready for visitors to the apple orchard and corn maze.

Thompson’s Hillcrest Orchard is just south of Lakeville in Elko, Minnesota. They’ve began planting in 1996 and now grow 10 varieties of apples on more than 1100 trees. They sell pumpkins, gourds, pies, jams, and pre-picked apples in addition to offering pick-your-own.

Nelson’s Apple Farm in Webster offers over twenty-five varieties of apples, either pre-picked or pick-your-own. Their gift shop offers unique specialty food items including the famous Apple Dandies served piping hot. On weekends they have hayrides and their resident goats are always up for visitors and a photo opp or two.

Once you’ve got your apples, you need to know what to do with them! One of the girls’ favorite recipes is homemade Mini Apple Pies. Autumn and Afton did a great job demonstrating and the full recipe is printed below:

We hope you enjoy the pies. For an extra special treat, try them with vanilla ice cream on the side! What are your favorite apple recipes? Please share with us in the comments! 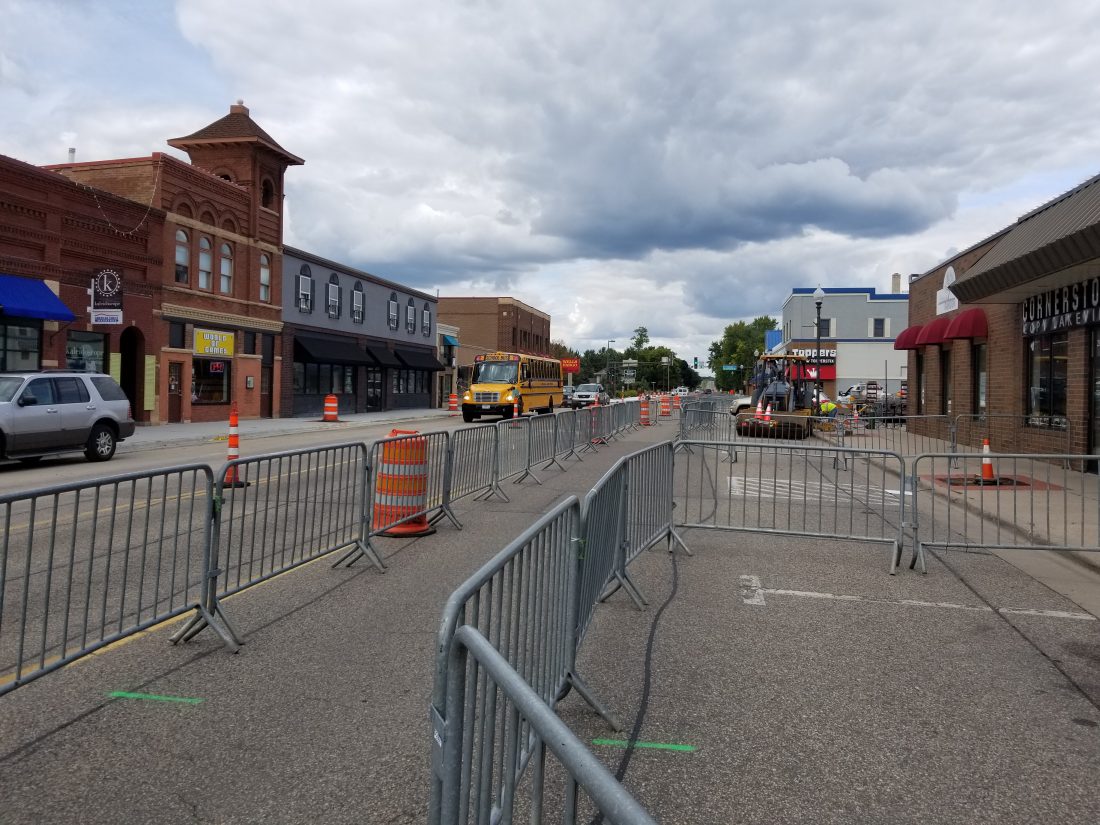 September 8, 2017 In Around Town, Downtown Lakeville By The Property Geeks

A New Look for Downtown Lakeville

Downtown Lakeville is getting a face lift!

Construction has been in full swing for the past several weeks. Yes, we’ve had to navigate metal barricades and dodge a construction vehicle or two, but the end result is going to be absolutely worth it. The city has a whole webpage dedicated to the project where you can see the concept drawings and keep up to date on the progress. Click here for access.

Our new office space on Holyoke Avenue provides a great vantage point to watch all of the changes taking place. We’ve been privy to some of the construction updates and wanted to pass along the news. 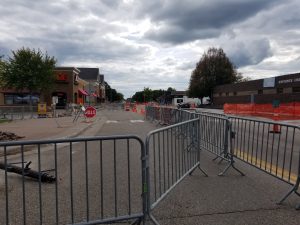 West Side of Holyoke 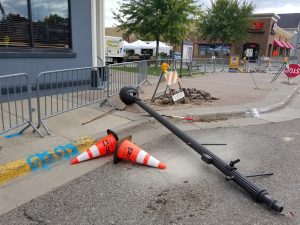 East Side of Holyoke

As for the east side where our office is located, they’ve started ripping up the sidewalk and removing the light posts. That work should be done next week. Then they’ll begin repairing the storm sewers, installing fresh soil and tree grates for new trees, and eventually pouring the sidewalks.

We hope you get a chance to head downtown and check the progress for yourself. Businesses are still open while the work continues. Please consider making the trek and supporting our local friends and neighbors. We’re excited for the changes to be complete and are looking forward to being a part of this next era in downtown Lakeville! 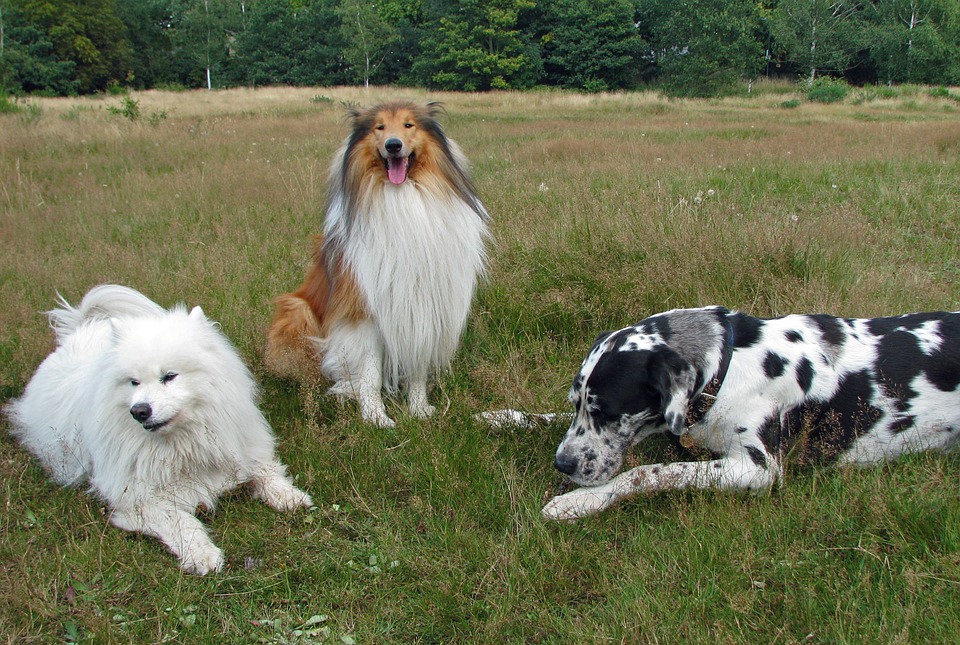 August 29, 2017 In Downtown Lakeville By The Property Geeks

August is coming to a close and with it, our Dog Days of Summer! To wrap up, we wanted to highlight some pup-friendly places around town where you can squeeze in the final bits of fun before summer comes to an end. Some are well suited for the whole family, some are geared more toward the over 21 crowd, but they all have one thing in common… they welcome your furry, four-legged family members as well.

Got a craving for those Reuben Nachos but feel guilty because Spot has been in his crate all day? Lakeville Brewing Company welcomes dogs to their fenced outdoor area and even provides water bowls. 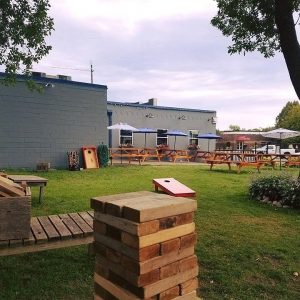 Get your steps in by taking Buddy for a walk then stop in for some refreshments on the patio of Angry Inch Brewing. You never know what deliciousness they’ll have on tap and your pup is welcome to chill out while you sip your local craft brew. 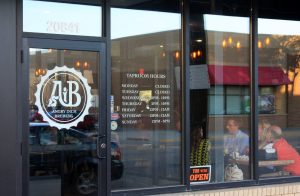 Right next door, Heavy Metal Grill welcomes dogs on their patio as well. If you go on a Wednesday you can grab a bite to eat and stick around to watch the bikes cruise by for their weekly Bike Night. 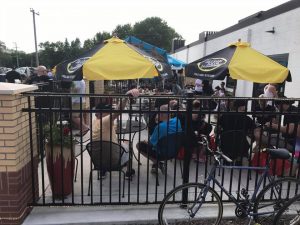 Mainstreet Coffee and Wine Bar has you and Max covered day or night. Whether you’re sipping your morning latte or meeting friends to indulge in an after-hours Cabernet, their large patio is pet and people friendly. 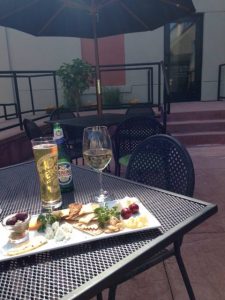 With all of these great spots so close to home, we’re wondering… do you take your dog with you when you go out? Are there other Lakeville spots we don’t know about that welcome dogs? Let us know and we’ll add them to our list! 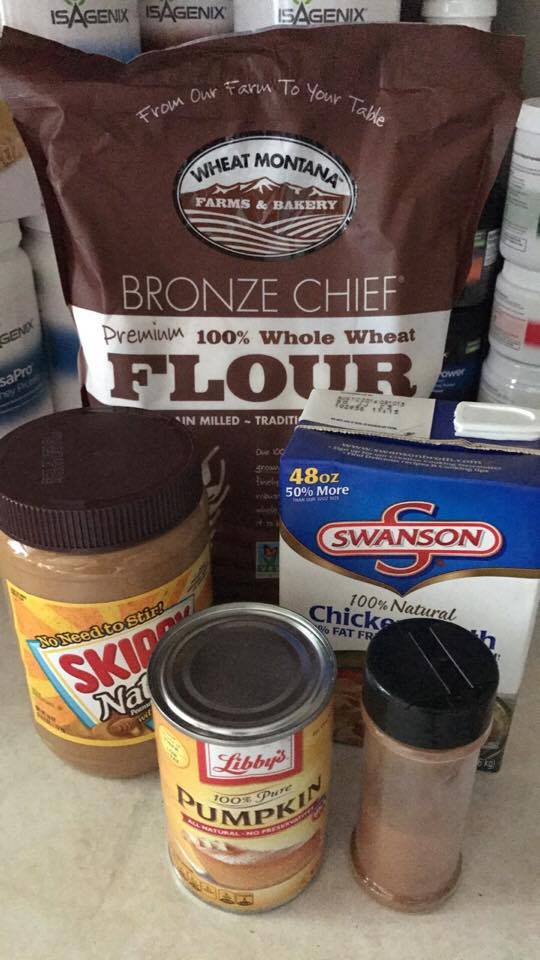 Dog Days in the Kitchen! 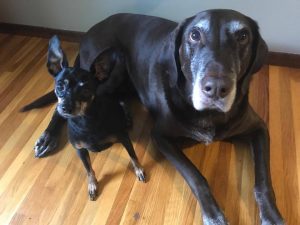 Property Geek Amy knows a thing or two about spoiling the ones she loves – especially if they’re the four-legged variety. With the summer real estate market being so crazy busy, Finn and Taz have been feeling a little neglected. To get back in their good graces Amy whipped up a batch of homemade doggy treats and she’s sharing the recipe! 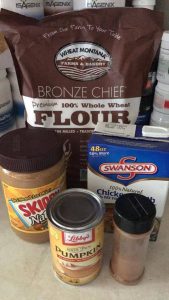 Preheat oven to 350 degrees. Stir together flour, peanut butter, pumpkin and cinnamon. Mix in chicken stock until well-combined. Transfer dough to a flat surface and roll to about ¼” thickness. Use a cookie cutter to cut out desired shape and place on an ungreased cookie sheet. Bake for 18 minutes until browned and firm. Let cool completely before storing in an air tight container. 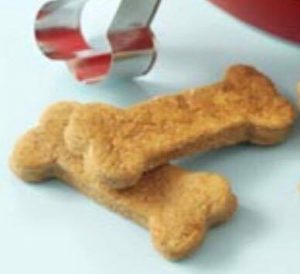 Do you spoil your canine companions with homemade baked goods? If you’re not in the mood to bake, check out some of our favorite local places to treat your pooch…

Chuck & Don’s  – Minnesota-based Chuck and Don’s has several locations throughout the Twin Cities, including a store in Lakeville. They sell food, supplies, treats and are dedicated to supporting the local community.

Wag n Wash – With self-serve dog wash tubs and a gourmet bakery, this is a one stop shop for everything your pup might need.

Just Dogs Gourmet – If you’re in need of a birthday cake or some of the cutest themed cookies we’ve seen, stop by one of their locations including the Mall of America.

Bone Adventure – A staple on the Twin Cities pet scene, this local pet store/bakery/grooming salon has been serving pets and their people since 1977. 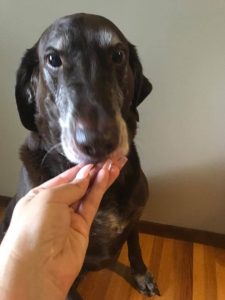 Where are some of your favorite places to take your pooch for a treat? 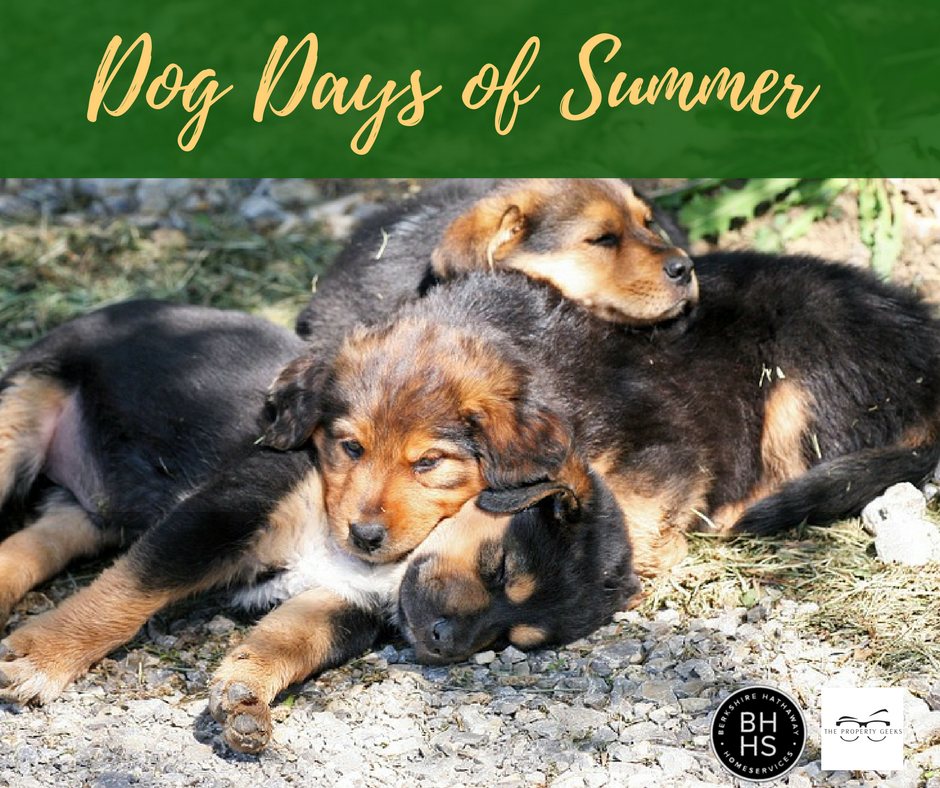 August 8, 2017 In Around Town By The Property Geeks

The Dog Days of Summer

How did it get to be August already? With June and July in the rearview mirror, we’re coasting toward Labor Day, most of the fun and excitement of summer break well behind us. School supplies stock the shelves (if they’re not sold out already!) The kids are bored and can’t find anything to do. The temperature soars and we’re trying to squeeze that last bit of fun into the few remaining weeks. These truly are the dog days of summer.

In an effort to crank up the fun meter on the little bit of time we have left, The Property Geeks are celebrating the dog days by featuring our furry friends. We’ve got a whole month of festivities planned. We’ll have contests, collect donations for canines in need and talk about some of the awesome things you can do around the Twin Cities with man’s or woman’s best friend.

Stay tuned and keep your eye on our Facebook page throughout the month of August. We’re going to have a woof-woof good time!